Don't miss the final concert of our free Noontime Concert series this Wednesday, August 29, featuring baritone Avery Griffin and pianist Scott Bailey in a program of art songs by French, German and American composers. The concert will begin at noon and end by 12:45- you are invited to bring a bag lunch to eat; St. John's will provide drinks and cookies.

Avery Griffin is currently pursuing a master's degree in vocal performance/pedagogy at Westminster Choir College in Princeton, NJ, where he studies privately with Elem Eley and is a member of both the Westminster Choir, run by Dr. Joe Miller, and Kantorei, a chamber ensemble dedicated to the performance of early and modern choral music directed by Dr. Andrew Megill. In addition to his studies, Avery is also an active church musician, singing with Trinity Church, Princeton, under Tom Whittemore and the St. Thomas men and boys choir on 5 th avenue in Manhattan, under John Scott.

Avery did his undergraduate work in voice at Boston University's College of Fine Arts, where he studied with Phyllis Hoffman. While a sophomore at BU, he received first place in Division 2 of the National Association of Teachers of Singing Boston chapter competition. He received the Harold Zulallian Jr. scholarship awarded to a junior for distinction in performance and academic achievement, and was one of two seniors selected to present the annual Ellalou Dimmock honors recital.

Avery is actively committed to the performance of new music. As a member of Time's Arrow, one of BU's student new music ensembles, he performed works by Dominick Argento, Wolfgang Rihm, Martin Amlin and James Radford. He is a founding member of NotaRiotous, a Boston-based chamber ensemble dedicated to the performance of microtonal music. He has performed the world premieres of James Bergin's Kyrie and Ezra Sims' Im Mirabell (the latter composed for NotaRiotous).

Scott Bailey is currently an adjunct professor of music at Westfield State College and private instructor of piano and accompanist at Massachusetts College of Liberal Arts. He has served on the faculty at the at and works as a freelance accompanist and teacher throughout the as well as . He has accompanied or worked for various organizations in including the Hampshire Choral Society, The New Opera, Berkshire Lyric Festival, Mass MoCA, The Drury Drama Team, and the Greylock Theater Project. He is the music director at the First Congregational Church of North Adams, United Church of Christ, and is coordinator of their North County Music Series, a concert series featuring local and emerging musicians from and beyond..

Posted by special events at 7:37 PM No comments: 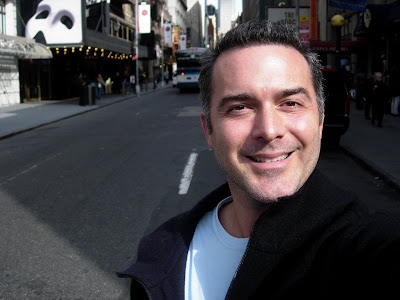 On Wednesday, August 22, Peter Davenport will sing a concert of songs by Cole Porter, accompanied by Christopher Marlowe, piano. The concert is free, and will begin at noon. You are invited to bring a bag lunch - St. John's will provide drinks and cookies. Peter's concert was a sensation last year, so don't miss this one!

Actor and singer Peter Davenport is a veteran of Broadway, off-Broadway and regional theatres, having performed in such roles as Captain Georg von Trapp in the National tour of "The Sound of Music"; The Snake in "The Apple Tree"; Dr. Carrasco in "Man of La Mancha"; Young Roscoe and Young Ben in Stephen Sondheim's "Follies"; and he has performed as soloist in concerts around the country and the UK. He can be heard on a number of cast recordings, including "Follies" on TVT Records (for which he recorded a previously unrecorded alternative version of "Beautiful Girls"); as Captain Nemo in "20,000 Leagues Under the Sea"; and his on own CD entitled "Clear Day" on LML Records.

Peter is thrilled to be returning to the St. John's summer free concert series again this year. Since moving to the Berkshires, Peter has been busy doing voice over work for local radio and television, as the voice for Hoosac and Williamstown Savings Banks and Cranwell Spa, and done readings with Shakespeare and Company as well as most recently with our very own Williamstown Theatre Festival. He hopes to be performing on their main stages one day soon, and he is currently working on his second CD due to be released in early 2008, this time of
all Cole Porter songs.

Christopher Marlowe (yes, that's his real name!) was the recipient of the 1996 MAC Award for Music Director of the Year. He was principally associated with legendary singer Nancy LaMott until her untimely death in 1995, serving as her arranger and pianist for the last eleven years of her life. His recordings with her have been the recipients of Backstage's BISTRO award and the MAC award for Recording of the Year. From 1997 to 2004, Chris conducted and arranged for Kathie Lee Gifford around the country.

Most recently, Chris worked on a pre-Broadway one-woman show with Bernadette Peters. He was the music director for David Zippel's All Girl Band at Joe's Pub at the Public Theater in New York, as well as for It's Better With a Band at the Prince Music Theater in Philadelphia. He has been the music director and/or arranger and co-producer for nearly 35 CDs of 23 different vocalists, including Peter Davenport's debut album "Clear Day". In addition to a soon-to-be-released CD of Chris' best loved arrangements, a CD of his own compositions, "Keepsake Lullabies" is now available.

Chris has performed on Good Morning, America; The Today Show; Live with Regis and Kathie Lee; The View; The Rosie O'Donnell Show; Late Night With David Letterman and twice at the Clinton White House.

Posted by special events at 7:22 PM No comments: 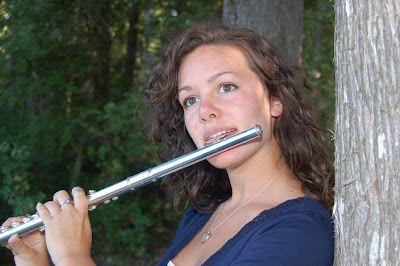 This Wednesday, August 15, St. John's will host two concerts, one by flutist Lucy Bergin, part of our Noontime Concert Series, the other by Village Harmony, at 7:30 pm (see below for more info)

Lucy will be accompanied by pianist Scott Bailey, in a program of works by Marais, Bloch and Poulenc. This free concert begins at noon and will end by 12:45. You are invited to bring a bag lunch to eat. St. John's will provide drinks and cookies.

Lucy Bergin, 17, will be a senior at this fall. She has played the flute since the third grade and is currently in her fourth year of study with Nina Barwell at the New England Conservatory Preparatory Division. Lucy has played in the Youth Repertory Orchestra, the Massachusetts Youth Wind Ensemble, and has sung in the Youth Chorale at NEC. She is active in her high school music and theatre program, organizes classical concerts by local teenagers through the Westford Teen Arts Council, and is a worship leader for her church youth group. She is planning to pursue studies in language and music in college. As a lover of the French language and musical style, Lucy is excited to include the Poulenc Sonata in today's concert.

Scott Bailey is currently an adjunct professor of music at Westfield State College and private instructor of piano and accompanist at Massachusetts College of Liberal Arts. He has served on the faculty at the at and works as a freelance accompanist and teacher throughout the as well as . He has accompanied or worked for various organizations in including the Hampshire Choral Society, The New Opera, Berkshire Lyric Festival, Mass MoCA, The Drury Drama Team, and the Greylock Theater Project. He is the music director at the First Congregational Church of North Adams, United Church of Christ, and is coordinator of their North County Music Series, a concert series featuring local and emerging musicians from and beyond.. 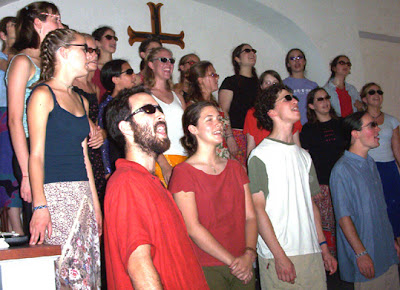 the unique teen world music ensemble based in ,
with special guest leaders and Marytha Paffrath, presents
a concert in the sanctuary at .

Admission at the door is $8, $5 for students and seniors.


The ensemble is jointly led by Paffrath and Park. Paffrath, a singer,

accomplished percussionist and avid student of world rhythms and
techniques, tours nationally and internationally with the acclaimed
world music ensemble Libana. She is also the director of the
Instrumental Music and Dance Program at the Cambridge Friend’s School
in . Park, a long time singer and leader with Village
Harmony and Northern Harmony, comes from a family of three generations
of traditional musicians and singers, and is well known throughout
for her work as a teacher and performer of traditional
Appalachian music and dance.

The concert program also includes: rousing American shape-note and
gospel songs, body percussion, music from the Balkans; Appalachian and
old time harmony songs; powerful West African drumming, and more. The
24 dedicated young singers are drawn from ten states in the US as well
as England and Canada, and they have just spent eight days in intensive
rehearsal retreat in Vermont’s Northeast Kingdom learning the music and
culture of these songs in preparation for this concert tour.

Each summer Village Harmony repeats this process ten times, with six
different ensembles traveling through and three or four
different groups overseas, this summer in ,
and . Each group develops its own unique sound, but all
share some common traits: a powerful, natural, unrestrained, yet
unforced vocal sound; a remarkable variety of vocal styles and timbres,
as appropriate to the many varieties of ethnic and traditional music;
and the vibrant community among the singers which always includes the
audience in a joyous celebration.

Village Harmony’s many recordings and songbooks will be available for
sale at the concert.
Posted by special events at 6:48 PM No comments:

This Wednesday, August 8, St. John's welcomes tenor Robert Scherr and pianist Edwin Lawrence, who will present a free concert of "Songs for Summer Travel". This concert is part of the Summer Noontime Concert Series, which will continue on Wednesdays throughout August. The concert will begin at noon, and end by 12:45. You are welcome to bring a lunch to eat, and St. John's will provide drinks and cookies.

Robert Scherr, tenor, has been heard in concert and many venues of musical performance throughout for over three decades. Comfortably at home in classical recital, he also has appeared in musical theater productions and opera. Cantor Robert Scherr served congregations for thirty-five years, distinguishing himself as a creative artist, innovative programmer, sensitive spiritual leader, and gifted singer. Since 2004, he has served as Jewish Chaplain.


Edwin Lawrence, piano, is Adjunct Teacher of Piano, Organ and Harpsichord, and Teaching Assistant in Theory and Eartraining at , and is a member of the Williams Chamber Players. His teachers include Gabriel Chodos (piano), Preethi de Silva (harpsichord) and William Porter (organ). He is Minister of Music at the First Congregational Church in Williamstown, and Music Director of the Bennington County Choral Society. He is a producer with Dorian Recordings. is a founding member of the Consortium of Vermont Composers and has conducted the Vermont Symphony. In 1990 he received the Citation of Merit from the Vermont Council on the Arts.

Posted by special events at 5:09 PM No comments: 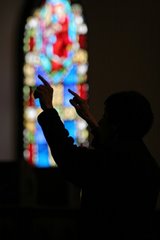